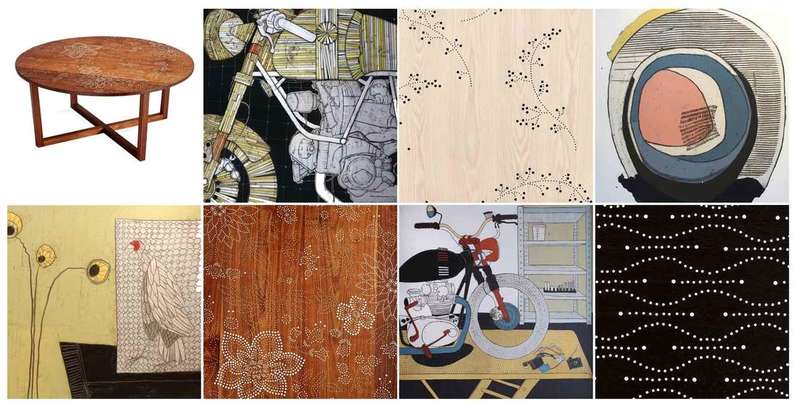 Peter Sandback has gained a national reputation for his intricate pattern work of inlaid nails set into minimalist handmade tables, benches and other functional forms that he designs and builds. Each piece is signed by the artist, complete with a cast pewter piece of chewing gum stuck under the table.

Sandback was raised in Brooklyn, New York, where he was immersed in the art world. His father, Fred Sandback (1943-2003), had a studio in SOHO in New York City and gained international acclaim in the 1960s as a minimalist sculptor known for his yarn sculptures, drawings and prints.

Sandback is a 2015 Martha Stewart American Made Honoree and has regularly exhibited at the International Contemporary Furniture Fair, held annually in New York City. His work has been featured in Fine Woodworking Magazine and NH Chronicle. Sandback received a BFA in industrial design from the University of Michigan and a MFA in sculpture from the School of the Art Institute of Chicago. He moved west to San Francisco’s Bay Area, where in 1992 he founded his furniture business. Since 1994, Peter has maintained a studio in Harrisville, New Hampshire.

Christopher Myott treats the surface of his paintings like a carving, using graphite sticks, palette knives and handmade tools to scratch into wet paint. His works draw from growing up in the rural northeast and explore his fascination with the industrial decay littering the New England landscape. He is inspired by the oil-soaked color palette of mid-century America and how it has weathered over the years. Layers of furniture wax and varnish are applied to highlight paint strokes and hard edges created during the painting process. His art distills compositions and colors into strong, flat, enduring imagery.

In 2005, Myott received a BS in studio arts at Chester College and thereafter spent two years living and working in Boston. After an apprenticeship at Boston’s Institute of Contemporary Art, Myott returned to the Monadnock region of New Hampshire where he currently lives. He works out of his three-story barn studio which is entirely dedicated to making paintings, creating furniture and rebuilding vintage motorcycles.

Myott’s work has been featured in Iron and Air Magazine, Yankee Magazine and other publications. His work can also be found in the permanent collection at Southern New Hampshire University, as well as private collections across the United States and Europe. Myott’s roster of group and solo exhibitions includes Stel’s (Boston), Sharon Arts Gallery and the New Hampshire Regional Art Auction.

​Christopher Myott and Peter Sandback: Two New Hampshire Artists and Their Modernist Visions will be on view in the Tower Gallery and Upstairs Gallery at New Hampshire Antique Co-op through June 30, 2017.

A wine & cheese opening reception was held on Saturday, March 25, 2017 in the Upstairs Gallery at New Hampshire Antique Co-op. Both Sandback and Myott were on hand to answer questions and discuss their methods and inspirations.